The current Lake level is 709.61 and falling with the water temperature in the mid 80’s.  Needless to say with the falling lake level and the heavy current, it’s been a wild week with the Hybrids and white Bass. 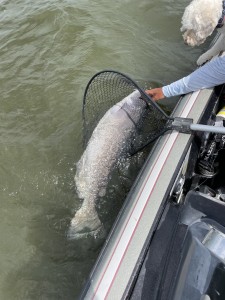 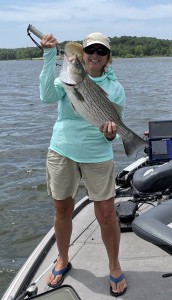 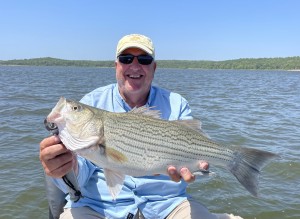 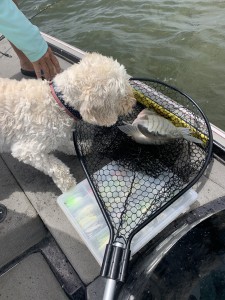 Tom and Cindy and Randy Brady, from South Dakota, spent three great days catching and releasing Hybrids, Whites and Catfish.  We kept the walleye.  Randy was the fish checker to make sure they were able to return to the water and gave them a lick for good measure.  I wish I had a video of him when someone had a fish on, because he is a real helper on the rod.  He grabs the cork on the rod and pulls.  We had lots of fish and lots of laughs and that’s what it’s all about.

Ron  and Kim Bailey, caught and released several nice hybrids caught on spoons and sassy shad.  It got pretty hot so before we came in they took a little dip in the lake.

The whites and hybrids are busting shad just before dark in many areas of the lake, especially near the dam.

I have not been crappie fishing now for a couple of weeks, but with the drop in water level I would be looking around the trees in 20ft of water.  Minnows and jigs are book taking crappie. 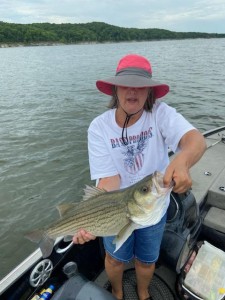 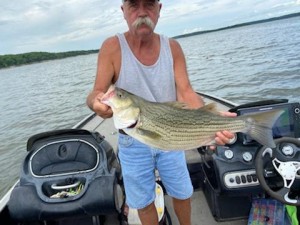 Larry & Cheryl Horne went on a “Education” trip.  Appears to have learned their lesson well.  The bite was off a little until after 1pm and then all hell broke loose.  A fun day for all.

That’s it for this report.  Watch out for the other guy and remember you life jacket works best when worn.

Tag-A-Long Boats at $50.00 per boat per day with one of the above packages. Please note that I am not responsible for damages to Tag-A-Long Boats or for personal injuries or other losses.

Sign-up to get the latest news and update information. Don’t worry, we won’t send spam!